News from the Umpires Association 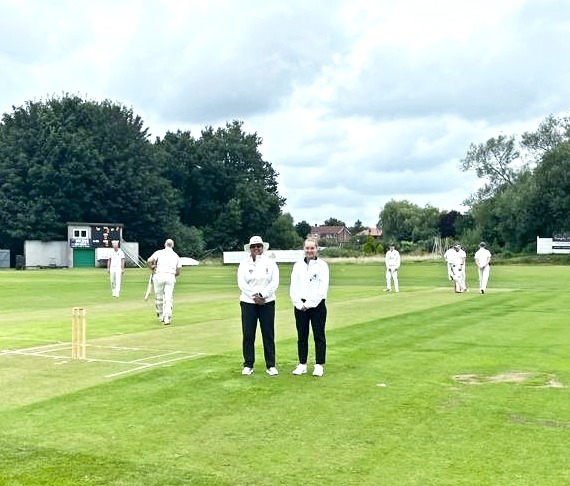 In a first for League Cricket in Lancashire two female officlas were appointed and stood in the Division One game between Chorley 2XI and Netherfield 2XI.

Panel Umpire Lydia Purvis who is in her first season of Panel Umpiring was joined by Jasmine Naeem, fresh from duties in the Womens Hundred competition.

You can attend a FREE ONLINE Level One umpires course by clicking the link - https://lancashireaco.wordpress.com/training/

If you want further information or have any questions or queries please email us at:

This email address is being protected from spambots. You need JavaScript enabled to view it. 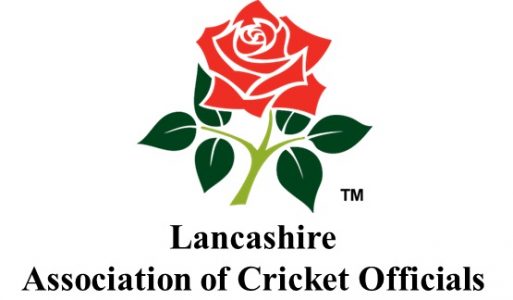 This Sunday sees the final of the Lancashire Knock Out Final at Emirates Old Trafford between Ormskirk and Burnley. I am delighted to say that two of our panel have been selected to officiate at this prestigious event, the premier club cup competition in the county. Congratulations go to Hillal Namajee and Adrian Darlington whose on field performances over recent seasons have justified their appointment to this game.

Prior to becoming the Palace Shield Umpires Secretary in the 1990s

Dearly loved husband of Heather, and will be sadly missed by all his family & friends.
The funeral service will take place at Longridge Parish Church of St. Lawrence on Friday 6th November at 10.00 am, prior to committal at Preston Crematorium.
Attendance at both the Church and the crematorium are restricted, those wishing to pay their respects are welcome but please do adhere to current social distancing regulations.
Family flowers only please, donations if so desired to the Rosemere Cancer Foundation
Read more...

Congratulations and many thanks to the umpires who were selected and stood in this seasons finals.

This new website includes information and links  for prospective umpires as well as links to the league regulations and some excellent CPD material which would be of interest to umpires, players and club officials.

The ECB ACO now have 3 courses available on line. These would be ideal for any player or club official who wants to update or acquire new skills/ The course are all free of charge and can be accessed via the following links:

“Basics of Umpiring” – This course is aimed at club umpires who just need to know the key laws and basic field craft and those players who umpire 5 or 10 overs at the weekend.

“Umpire Stage One” This course is designed to give an overview of the basic Laws of the game and how to apply them and introduce the principles of field craft and match management. This course is an ideal introduction for new club umpires, a refresher for existing umpires and the first step for those who aspire to umpire at higher levels.

“Basics of Scoring” This course is designed to provide you with all the skills needed to start scoring. The course covers the basics of scoring a game of cricket such as scoring symbols, umpire signals, dismissals and gives a helpful overview of the Laws of the game.

The Stage 1 Course is the an on line version of the course we normally run in the autumn, anyone who takes the course and wants any support an contact me by email and I will try and help with any queries they have.

So today we should have all been looking forward to the start of the new season having waited all winter, I am sure like me you are disappointed. Clearly there is still some way to go before we will know what shape the season will take but I am hopeful we will get some cricket during the summer. In preparation for this and given that we have had to cancel the pre-season umpires meeting, I have prepared a short summary of the various rule changes that were voted in by the clubs at the two league AGM's that took place over the winter.

If you have any problems opening this Powerpoint presentation please contact me and I can send over a pdf version.

As a presentation it is very much in summary form so if you have any specific questions don't hesitate to contact me and I will try and answer them.

As you will see we now have DLS (strictly DL!) in both leagues, if anyone wants to organise a one to one training session on the use of the app let me know and we can set up a video call to go through it.

Although we don't yet have a start date for the season my intention is that once we do I will contact everyone outlining any additional safety measures we can put in place and then asking you to confirm availability to stand and to update availability on WTU . Once I have a revised panel I can then allocate the games. We will then have to arrange how to get out to you any documents etc that you may need.

You may have seen that WTU have now launched an App which will allow you to manage your fixtures and availability on your smartphone. I haven't yet downloaded it but will do soon and let you know my thoughts.

Any questions let me know but in the meantime keep safe and keep well.

Just a final reminder that Questionnaires are due to be submitted by this weekend at the latest, I have heard from the vast majority of you but anyone who hasn't yet let me know their intentions I would be grateful if you would do so. If you are not intending to join the panel a simple email, text or call to say so would be appreciated.

You maybe aware that this week both the PS (Monday) and NPCL (Thursday) held their AGM's where various rule changes were proposed and voted on. I will go through these in full at our pre-season meeting but thought you might be interested to know the changes that were passed and which will apply in 2020.

I will deal with this first as it is the simplest:

Only one change pertaining to the playing conditions in league 'panel games' was passed and that was to re-introduce 'leg side wides' to Division 1 A&B and the Loxham Cup. This brings the Prem Div and Div 1 in line again as it was in 2018.

In all the cups fielding circles were introduced with, as per league games, 4 players having to be within the circle at all times (previously only in Meyler Cup). In addition, in all cups the fielding circles will also be used to introduce a powerplay so that for the first 8 overs only 2 players are allowed OUTSIDE the circle.

A number of changes were introduced following extensive consultation with players. All of these were passed unanimously:

1.Match Times: All league games will now start at 12.30 throughout the season. All other timings are adjusted by 30 minutes.

2. Bowlers Over Limits: The limit on bowlers has been reduced to a maximum of 15. This only applies to the first 50 overs of the innings. In addition where the number of overs in an innings is reduced due to weather etc then the 15 over limit will also be reduced. A table will be provided in the handbook with details of these reduced limits.

3. Target Scores: DLS will be utilised to set revised Target scores where weather intervenes after the game has started. Note this does not preclude draws in weather affected games. DLS will only be used to set revised target scores, the 'par score' element of DLS will NOT be used. The regulation makes it clear that revised Targets scores will be agreed after each interruption by UMPIRES, CAPTAINS and SCORERS.

Both leagues adopted basically the same discipline rules so that in future all Level 1, 2. 3 and 4 breaches MUST be reported via email to Steve Beswick who is now Discipline Chairman for both leagues. The main impact of this is that reporting of discipline via the 'yellow form' in PS games will no longer be permitted. Steve will present a session on reporting at our pre-season meeting.

There were a number of other minor changes agreed which don't directly impact on us as umpires.

If you have any questions please feel free to contact me but as I have already said I will go through ALL changes in some detail at our pre-season meeting.

Just leaves me to thank you all for your support in 2019 and to wish you and your families a very Happy Christmas and a healthy and prosperous New Year.