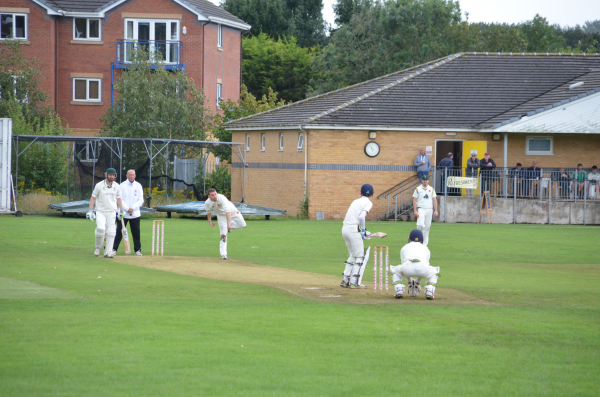 After the rain that fell this week Barrow Captain Daryl Wearing elected to field after winning the toss.  It looked a very good decision after Eccleston lost their first 5 wickets with only 35 runs scored, however Jordan Bentham once again came to the rescue scoring 60 together with Stewart White (23) Eccleston managed 136 for 9 in their allotted 45 overs. Not a great score and Barrow would have been relatively comfortable with that.

After the interval Cameron Smith and Captain Michael Atkinson set about the Barrow batsmen and caused havoc. Barrow were reduced to 40 for 6 with Smith 2-27 off 12 overs and Atkinson 4 for 12 off 15 overs. The tail was not able to add many more and Barrow were all out for a miserly 71. This has put a big dent in their aspirations for promotion.  Barrow have dropped to fourth albeit with a game in hand.

This was a must win game for both sides who are struggling at the foot of the table. The home skipper won the toss and inserted Croston. Batting was not easy but 24 were scored before the first wicket was taken. A number of Croston players got starts into their teens but ended back in the pavilion without pushing on. Only Jake Parson with 37 enabled Croston to reach 128 for 9 in 45 overs. Jon Lee with 3 for 27 was the best of the Fylde bowling attack.

Will Smith (20) and Michael Watkinson (20) gave Fylde hope at the top of the order but  wickets then fell steadily with only Danny Smith with 22 offering resistance. Jon Driver took 3 for 26 and Jack Marsh 3 for 30.  The home team being bowled out for 106 leaving them in 11th place and 15 points behind Croston in 10th

Will Thistlethwaite was captaining Gt Ecc and inserted Penwortham who have had a fairly decent season as they  blood a number of young players and they made a decent start with Ilyas (16) Brierley (21)  and Dillon (30) all getting starts. Charlie Parker then added 60 at a run a ball again the tail, with the exception of promising young all-rounder Ryan Roberts with 16 no gave Penwortham a total of 187 for 9. The wickets were share around with Will Metcalf (3-23) Alex Rhodes (2-32) and Jim Procter (2-25)

Gt Ecc had a poor start losing both openers with the score on 1. But Richard Booth with a steady 31 off 48 deliveries and a more aggressive 82 off only 52 deliveries by young Alex Rhodes put the home team in the ascendancy. A further 23 by Adam Green and 21 by Jon Jefferies saw the home team home by 3 wickets. Penwortham drop to 6th in the league table.

South Shore decided to bat on winning the toss. They are struggling at the foot of the Premier Division and do look as though they will have to re-group in Division 1A next season.  Captain Max Cowell-Makin battles well and averages over 25 but has not received the support his colleagues would have wished. On Saturday Max scored 24 and Amjad Mehmood 22 no other batter managed to get into the 20’s and the Shore were bowled out for 143 in 41.2 overs.  Ant Wilson return 4 for 40 ably supported by the Hogarth brothers with 2 wickets apiece.

Kirkham knocked the runs off comfortably with a good 64 not out by Stephen Wright and a more belligerent knock of 56 off 25 balls from Sean Bovington. Tyne Daly took 2bfor 17 in a losing cause. Kirkham winning by 7 wickets. They have quietly moved up to third in the Premier Division and are only 11 points off top. Excellent progress by K&W.

Alistair Craig was captaining Penrith with the rainfall and a greenish pitch he decided to give Cleveleys first use of the pitch on winning the toss. The top five made contributions with Jon Eade the best with 41 and Josh Sackfield with 32. Keeper Sam Curwen with 21not out and Tom Williams with 23 added to a total of 183 for 7. Penrith were without their opening bowler James Ellis but Greg Cameron took 3 for 39 from his 12 overs.

Greg then opened the batting and top scored with 16 as Penrith were blown away for a very disappointing 47 all out. This has seriously dented their immediate hopes of returning to the Northern League. Anthony Ellison return of an excellent 5 for 26 off 10.4 overs and Jake Apperley with 3 for 8 from 6 overs clinched a victory by 136 runs.

Off spinner Joe Allen captained Vernon’s in the absence of Bob Bridges. Joe won the toss and elected to bat. Returning Ian Dunne (74) and Mathew Stevenson (53) gave Vernon’s the best possible start in any of our top divisional scores. Putting on 128 for the opening wicket. David Sullivan added 20 and Vernon’s were 162 for 5 after their 45 overs. Imran Mehmood took a credible 4 for 32 from his 8 overs.

Joe Allen with 4 for 40 from 12 overs and Jacob Holland with 3 for 32 were the primary wicket takers. Vernon’s leap Penrith to lead the table after 16 games.

More in this category: « 2 Days left to Have Your Say MCC »
back to top