The Play Cricket App can be downloaded here

These notes are intended as guidance for umpires in checking DLS calculations. It is recommended that umpires unfamiliar with the App, print this document and the screen shots attached and take them to each game.

As per Moore & Smalley Palace Shield Appendix E, in Premier and Division 1 the home team is responsible for ensuring the Play Cricket Scorer App is available, for all calculations and for displaying the ‘Par Score’ at the end of the forthcoming over and for adjusting this should a wicket fall.

During the 1st innings there is no need to enter anything into the App you just need to note for later use the following factual information if any stoppages occur:

Then during the interval between innings you should check that Screen A and B below have been entered correctly. 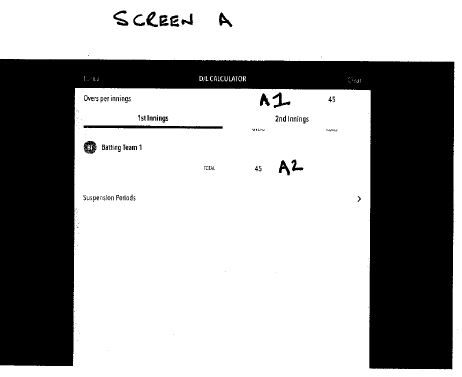 ONCE THIS IS SET IT SHOULD NOT BE CHANGED

AGAIN ONCE ENTERED THIS SHOULD NOT BE CHANGED.

Note: The number of overs shown at A2’ will be automatically adjusted by the App should a ‘Suspension Period’ have been entered (see Screen B below). 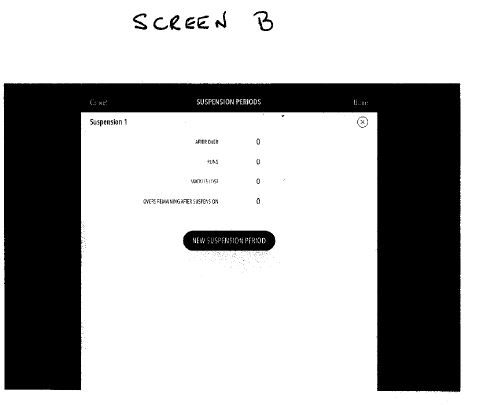 In the 2nd innings for each interruption in play the process is the same except that the number of over remaining will be calculated by working back from 8pm.

As both teams will want to know the revised target before play resumes after a second innings interruption, you will need to check the Suspension Period details have been entered correctly  BEFORE play recommences. The details required and the screen input are exactly the same as detailed for the first innings above. 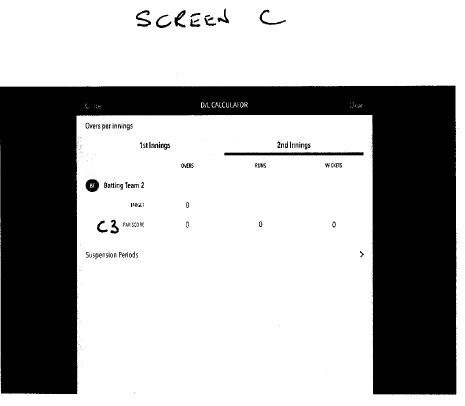 Note: The Target Score will be recalculated automatically after each interruption is entered.

As play continues in the 2nd innings, particularly if weather threatens an abandonment, it is likely that both teams will want to know how they stand in relation to the Par Score (i.e. is the team batting second ahead or behind where they need to be).

Clubs have been reminded that it is their responsibility to display the Par Score on the scoreboard over by over and so the umpire should not be required to use the App while on the field.

If the game is abandoned after 20 overs and you need to check the Par Score at the end of the game to determine the result:

At Screen C3 enter the number of overs completed and the wickets that have fallen. The APP will then calculate the Par Score.

To win the team batting second must have scored at least 1 more than ‘Par’.

If they score exactly the same as ‘Par’ it is a tie.