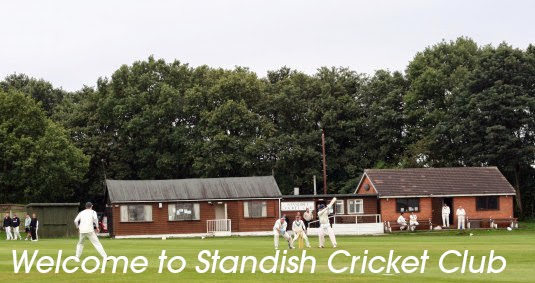 Although the exact age of Standish Cricket Club is uncertain, it celebrated its centenary in1977.

The present ground on Green Lane was purchased in 1922 for the purpose of Cricket and Tennis, the main mover being Cannon Hutton, Rector of St Wilfred's who was club president from 1894 to 1938.

Minutes of the club's early history charts many interesting facts from 1894 onwards including the application to join the Wigan and District League in1895 and employing a grounds man for three shillings and three pence per week in1898.  The club must have been affluent in those days as the employed a professional, M H Watson in 1901 at 25 shillings a week!!  Many professionals were employed, from as far afield as Stratford-on-Avon and Catford.

In 1920 the club joined the West Lancashire League winning the Salter Cup in the same year.  In the same year the club bought 2 Pavilions, a roller and a mower from Haigh Parish Cricket Club for £16.

In 1984 Standish CC joined the Bolton and District Cricket Association and to date have been Championship runners up but the main prize has eluded them.  In 1987 the club won the Vimto Cup and the second XI the Haliwell Shield and in 2007 won the Cross Cup the major knockout trophy in the Association.

The club still at their Green Lane ground but with a larger pavilion and function room, including fully licensed bar, kitchen and cosy snug, now boast separate fully equipped changing rooms and a large purpose built score box and score board.

Standish CC has three senior sides, and also a potential to field junior sides at under 15 under, 13 under, under 11, and under 9 age groups.

Over the years Standish CC has employed a variety of professionals from local successful players to those in or on the verge of international teams.

There have only been three presidents in the history of the club, the Rector Hutton from 1894 to 1938, Albert Seddon from 1938 to 1977 and Fred Bazeley from 1977 to present date.  The current President, along with the then Chairman Gerry Hisley appeared on the popular radio programme 'Down Your Way' hosted by cricket personality, Brian Johnston, again in 1977.

Life members of the club, an honour awarded for many years of stalwart service are Fred Bazeley, Derek Elwood, and Brian Forster. David Rigby and Mrs Emily Wilkinson.

After 25 years, Standish have left the Bolton Cricket League System and join the Palace Shield.

Their Juniors will continue to play in the Wigan & District Junior League.