Among the cricket archives is an unframed photograph of a number of young men, taken around the 1880’s, who were, perhaps, the veiy first Penwortham side. Two rows, one standing and one kneeling in front, without jackets, shirt-sleeved, in corduroys and minus collars and ties, were the lads of the village — as distinct from two youths lying languidly in the foreground, properly dressed after the then fashion in white shirts, cream flannels, snake-head belts and all. 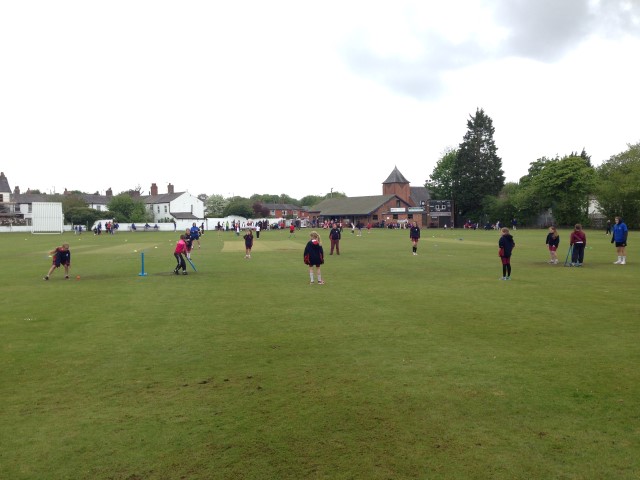 The Club’s stalwarts at this time were Bill Fiddler, Will Kirkham, and Daniel Sanderson, possibly it’s “founder members”. The Club played for some years in a field opposite the Black Bull Inn in Pope Lane, (known generally as the Bull Field), prior to moving it’s present site in 1892. Our field was at that time rented to the Pear Tree Inn and was used by drovers, night-stopping with cattle which were being driven from market to market. For the annual payment of £10 the Club had the right to enclose a portion of the middle as a wicket and to play matches during the season. The local squire, a Marshall-Finch , who had leased the ground to the Pear Tree in the first place, got to hear of this payment to the landlord, mightily disapproved, discontinued the lease to the Pear Tree, and let the Club have unrestricted use of the ground on payment direct to him of the £10 per year.

On 4 November 1901, a meeting was held in the Railway Hotel, Talbot Road, Blackpool, at which our Club’s representative, Daniel Sanderson, proposed that a Shield Competition be formed. Since that day we have had unbroken membership.

The following year, 1902, the Club made a great stride forward. They erected the two-storied white wooden pavilion, which served until 1977. It was originally a boathouse on the riverbank, probably somewhere near the Continental Hotel as boating on the Ribble was a very popular pastime in those days. It cost £10 to buy, plus £100 to have it dismantled, transported and erected. During the 1914-18 War, the Shield Competition was closed down and the pavilion was let as a furniture store for the duration.

The 11th October 1920 was a historic day for the Club, for the Minute Book reads:
‘Proposed J Dransfield, seconded W Humble that we enter into negotiations with M/S Fair and Rea, agents for the exors. Of the late Rev. T. R Finch for the purchase of the ground”. On 21 February of the next year and Extra-ordinary General Meeting was held to allocate districts to members for the purpose of making a house-to-house collection towards the cost of purchasing the ground and finally, on 28 November 1922 “Mr T Robinson gave a statement of accounts re the ground fund, informing the members that the ground was now free from debt”.

The Palace Shield Competition again closed down during the 1939-1945 war, but friendly matches were arranged until 1946 when the Competition was back in full swing.

Soon afterwards the Club took the highly imaginative step of organising Junior training evenings every Friday from mid-May to early August under the tutelage of Bill Alley and Bruce Dooland (the latter being replaced for the thirds season by Colin McCool when Bruce left for Notts). These training sessions resulted in the Club gaining so many new members that it became imperative to run a Third Xl on Saturdays and this was duly formed, 1954 being the first season, and it has been in operation ever since.

The Club was unfortunate in 1952 in being unable to purchase the land covered by Middleforth Green. Quite frankly, there was no money available to compete, short of taking out a mortgage on the ground and this was deemed inadvisable. The result was that we were first bordered by a home for derelict cars and later by a home for caravans, prior to the land being re-sold to a builder.

In 1977 we were able to replace our sagging old ‘boat house’ pavilion (in the end it didn’t need much more than a good push to end it’s life!), and were fortunate to obtain a new one which had formerly served as a scout hut for the Kingsfold Methodist Church.

The dismantling, transportation and re-erection was a tour de force by our large amateur work force, particularly as it went up in icy weather in “bleak mid winter”. Furthermore, we were able to use the Job Creation Scheme, via the local council, to extend the building to include a large equipment store, showers and toilets plus verandah.

That same year we also entered into partnership with St Leonards Institute & Bowling Club, whose facilities adjoin our own, to form the venture known as the Penwortham Sports Club. This enabled us to have an improved social club with, for the first time, a licensed bar. The partnership lasted 18 years when the aspirations of the two parties drifted apart and a formal split from the Penwortham Sports Club was agreed too.

1980 we celebrated our centenary highlighted by a game against a Lancashire CC Xl, lead by Jack Simmons as part of his benefit season, who did us proud in bringing along a formidable line up of first team playerswith Test umpire Bill Alley officiating and Messrs David Hughes and Frank Hayes putting on a century opening partnership in 14 overs! In 1992 we celebrated a 100 years of playing on our present ground against a World Xl including a young Brian Lara.

As the Millennium loomed we undertook our most ambitious project in 1995, with the help of a massive fund raising effort and a National Lottery grant. We had effectively out-grown our ‘scout hut’ and the opportunity to build a modern brick sports pavilion on the car park was given the green light. Thankfully the development was concluded just in time, when fire completely gutted the wooden pavilion which had served us so well for 18 years.

The bare bones of our playing history successes could be cited as: 14 times Palace Shield winners; 20 times runners up; 6 times Meyler Cup winners; 7 times runners up. Second Xl: 4 times Division champions; 5 times Loxham Cup winners. Third Xl: once winner of Crabtree Cup and twice runners up. We were proud to be one of the founder members of the Junior Section when the league was formed in 1972 and have remained committed ever since.

The ingredients of the cake proper are all those characters who have graced the Club over the years:-
The Sandersons in the early years (beginning with Daniel already mentioned). It was minuted that J Sanderson was Treasurer and F Sanderson ran the refreshment bar. It was resolved “ D Sanderson would print the fixture cards for 1912 in the same terms as 1911”. The latter was a different Daniel Sanderson, but all related to the same family as our current President Frank Sanderson (who incidentally still prints the cards to this day-and on the same terms as 1911).
E Barnes our loyal groundsman for so very many years, whose ashes were scattered over the ground at his last request. Those who recall the steepness and height of the old boathouse roof will appreciate the beauty of the minute: “Mr E Barnes was reported as being willing to paint all the pavilion but thought that tarring the roof might be too much for him, at the age of eighty!”

Fred Pye and Charles Crabtree who did so much to keep the Club ticking, before, during and after the Second World War and after the war, the Athertons. Four brothers were in the First Xl at one stage. Albert the eldest being first team captain, Chairman and Trustee could be said to be the personification of a large part of our Club’s history along with Charlie Walsh, 30+ years Chairman through to 1999 and Driving force of many of the projects undertaken to improve our facilities. Tom Kendall who was secretary for over 20 years-walked every where and had a unique telephone manner-never said who he was and ended the conversation usually when the listener had just about realised who he was speaking to. Sadly, Tom passed away whilst we compiled this history to which he was a great contributor.

Our Club badge was a golden martlet, thanks to the initial drawing by Richard Watson, former Preston District Librarian., a close friend of the then Treasurer, Bert Ward.