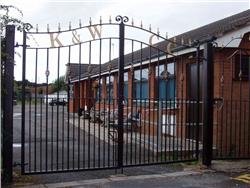 One of only two founder members who have retained full membership of the league for all of its 100 years, Kirkham CC continue to play a short distance from the place where the Competition was re-formed in 1919, the Railway Hotel, Kirkham, which remained the regular venue for meetings until the 1960s.

The club was founded in 1830 and it is known that Kirkham played Preston in 1837. The present ground has been in use over 70 years and was purchased by the Club in 1946. Prior to becoming a founder-member of the Palace Shield in 1902, the Club played in the Preston and District League. The Club has a number of old photographs the earliest of which was taken in 1884.

Kirkham provided several of the early officials of the Competition, including the first Chairman, A.E. Bennett and Secretary, H. Etchells. Mr T. Milne served as Secretary and Treasurer from 1906 to 1914 and Mr A. Ward from 1919 to 1927.

The Club had quite a good record in the Competition in the early years, winning the Shield on four occasions in 1904, 1906, 1908 and 1935. The playing strength included individuals of outstanding merit, such as L. Budden (every bowler was glad to see his formidable figure back in the pavilion) and slow left arm bowler Bill Roberts, who left to play for the County and represented England in the ‘Victory Tests’ in 1945

In the second half-century , successes on the field have been few and far between, although the First XI managed to finish runners-up four times in Division A, including consecutive occasions in 1983/84, under the leadership of Doug Moore. For most of this period, stalwart George Townsend, who recently celebrated his fiftieth anniversary as a playing member in 2001, has served the club admirably.

Off the field, the club was well served for many years by the trio of Bill Charnley, Norman Swift and Bob Hird as Treasurer, Chairman and Secretary respectively, the latter being one of the few to be mentioned in the Jubilee Handbook of 1952 and still being an active member of the club.

Kirkham’s own 150th anniversary was celebrated in 1984 with a match against a Lancashire CCC Xl.

The club has invested heavily in new facilities during recent years with a new pavilion being opened in 1989, followed by an extension in 1994 comprising new changing rooms and scoring facilities.

The vehicle entrance for the club has now changed from Woodlands Avenue
to Wellington St (PR4 2JN) - the club can no longer be accessed via
Woodlands Avenue by vehicle - pedestrian access is still ok.